Who Should Play Brooke in BC9: The Movie?

Like many authors, I dream of my stories and novels one day coming to life on the big screen. Of all my works, I would judge Beyond Cloud Nine to be the most Hollywood-friendly. Just imagine all the space dogfights in 3D HD. Picture Brooke in her sleek black flight suit and helmet gripping the dual HOTAS control grips and accelerating at hundreds of gees. Jupiter, Callisto, and Titan's orange clouds and methane rivers would make for quite an exotic setting. I'd definitely pay to see mammoth star ships getting torn apart by the space-time wake created by the phase fighter.

Most of all, I would relish seeing the BC9 characters brought to life. And just who would play the part of ace pilot Brooke Davis? Both Grace Park and Stephanie Jacobsen (Sharon Valerii and Kendra Shaw, respectively, from the new Battlestar Galactica) come to mind. They're fairly obvious choices because they starred in a military sci-fi drama, and Sharon Valerii was a pilot. Although neither actress has Japanese heritage, both are of Asian decent. They're also both a little older than Brooke, but I think either actress could pass for a woman in her mid-twenties. 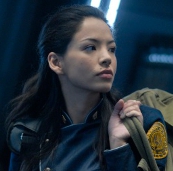 Jacobsen, in her role as Kendra Shaw, displayed the more hard-ass, pessimistic, Brooke-like personality. Her accent wouldn't work (it's sexy, but Brooke isn't Australian). However, that doesn't necessarily eliminate her. Anna Torv (Agent Olivia Dunham of Fringe) showed us how a talented actress can lose the accent when required by the role. 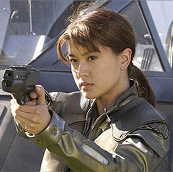 Park, on the other hand, might do a better job of playing both Brooke and Marie, Brooke's sister. If you think about it, the same actress would likely have to be cast as both characters since Brooke and Marie are identical twins (unless you can actually find a pair of Japanese-American twins). Park played numerous different roles in Battlestar Galactica: Sharon Valerii/Boomer, Sharon Agathon/Athena, and other Cylon model eights.

If I were the director, though, I would probably cast an unknown actress as both Brooke and Marie, someone who fits the roles to a tee, someone who doesn't bring any preconceptions from past work with them. And I would definitely shy away from using a big-name actress. No matter how much more revenue that might rake in, I would want people to fill the theater because of the story first.

Who do you think should star in a hypothetical Beyond Cloud Nine movie?