Beyond Tech: The Wave Gun 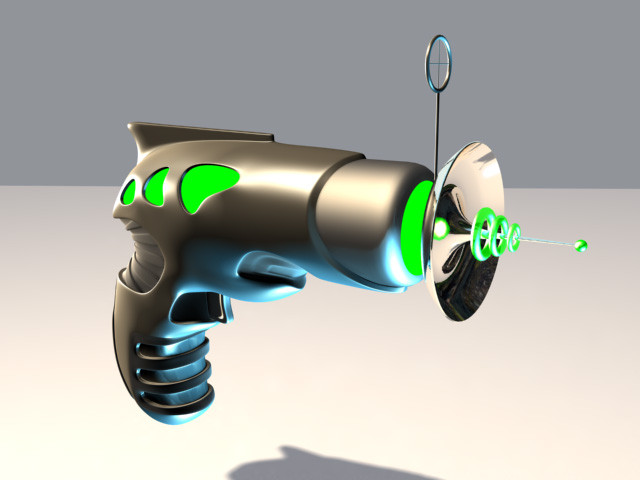 Before I get into the tech talk, I'll start with a status update. Scroll down if you only care about the rad-tastic tech. I won't hold it against you.

I've written about ten chapters of Beyond Existence (BEX). That's probably somewhere around a quarter of the first draft. I'm guessing book four is going to be the longest entry in the Beyond saga, given all the loose ends that need tying off and the general awesomeness that needs to occur.

Eight chapters of progress since October isn't great progress (I had finished two chapters at the time of my last blog post). I had hoped to complete the first draft by about now, complete draft two and start the editing process by summer, and release BEX before the end of 2018. Well, barring an uncharacteristic, nanowrimo-like writing spurt, I'm unlikely to stick to that timeline. More realistically, I hope to finish drafts one and two by the end of 2018 and release the book by summer 2019, but we'll see. My motivation has still been lacking, but I've recently resolved a few plot points that have me a little more into it.

The most exciting recent development is that I've hired a new promotional service. Actually, the promoter, Mike, is the same guy who was promoting me earlier, and he found me (again). He split away from his partner, the one who told me that the fundamental nature of my books might never generate the type of ROI necessary to make the promo costs worthwhile. Well, it turns out that the partner was outsourcing the promo work to people who didn't know what they were doing. I had been convinced that at least two of my three promos with the old service had not been executed correctly, resulting in me spending more money than I made. Thus, it was vindicating to find out I was right and even more important to learn that the issues may not have been my books after all.

My first promo with Mike is this Thursday, March 29. For part of the day Thursday, Beyond Cloud Nine will be free on Amazon, so get it while the getting's good. If the promo goes well, my motivation to write book four will skyrocket.

I'm not going to lie. I enjoy writing. If I couldn't make money at it, I might still do it. But when you weigh the amount of time, effort, and cost required to publish and promote books that don't sell against the good money I make in my day job along with all the other things I could be doing with my personal time, writing loses a lot of its luster for me. Fortunately, I believe the Beyond Saga and the future works that I have planned are of sufficient quality to one day free me of the chains of the day job.

And now, the fun stuff. One of the cornerstones of my stories (and of all hard science fiction) is to only include things that could exist or happen. Technology falls under that umbrella, and one of the future-possible pieces of tech in the Beyond Saga is the wave gun.

For those of you unfamiliar with the wave gun or needing a refresher, it's is a futuristic handgun that generates different types of waves capable of producing various effects.

The gun can emit sound waves to shatter solid objects (like someone shattering glass with a high-pitched voice, only much more advanced) or make objects float (the scientific term is acoustic levitation).

The device can also manipulate air flow and create air pressure, taking advantage of Bernoulli's principle. Maya uses this feature early on in Beyond Yesterday to pull a flying robot closer.

A wave gun can even set things on fire. Applying energy to an object or drawing on the object's own energy to oscillate particles and raise its temperature, the gun can cause near-spontaneous combustion.

Other features include the production of electromagnetic waves (to, say, create a force field), gravimetric waves (to cause subtle gravitational effects like vibrations), radiation, and light (photons possess both wave and particle properties). The gun could thus serve as a very, very overpowered and overpriced flashlight. Finally, a wave gun has conventional particle gun or laser modes as well.

We see the wave gun do many of the above things in books two and three. In book four (mild teaser), the wave gun gets upgraded (and possibly renamed), gaining the ability to open person-sized wormholes and more.

So now that we've covered what the gun does, how does (or rather, would) it work? Obviously, we can't really make it work today or any time in the near future. But since I'm claiming it's possible, let's theorize about ways we might eventually make it work for real.

If you do an online search for "acoustic levitation," you'll find cool videos of people making stuff float--granted, small stuff. But sonic wave generators exist. Making something float requires applying sound waves in a very precise manner. No one has yet managed to make a bigger object like a car or, say, a stone large enough to use to build a pyramid. But it is theoretically possible to scale up the effect with precise enough calculations and control of the waves, especially with enough power.

To shatter an object, one must find its resonant frequency, the frequency at particles will oscillate with greatest amplitude. In other words, there exists a vibrational frequency at which you can really shake up the molecules that make up something. With some fancy sensors, the gun would determine the resonant frequency of an object. Then it would apply precise vibration with enough energy to shatter a much larger object. Nothing as large as a building, but it could break apart that big old boulder rolling down the hill before it smooshes you.

Today, we create electromagnetic signals all the time. Radio, TV, cell phone, etc. NASA is researching force fields (along with warp drive and deep sleep), so that should tell you that there's real promise there. The problem is that electricity, while easy to generate, is much harder to control and shape. But again, theoretically possible with more precision and power. Plasma may be a better medium than electricity, though. Speaking of which, the last time I checked, Boeing was working on a real plasma shield to lessen the impact of an explosive shockwave.

One of the main enablers of the wave gun's capabilities is its power source. A wave gun contains an antimatter battery. Now, antimatter is a whole other topic that I'm not going to get into in this post. For now, just know that a matter-antimatter reaction produces more energy than a fusion reaction (the fusion of hydrogen is what powers the sun), given the same amount of fuel mass. Antimatter bombs much more devastating than any hydrogen bomb could one day be constructed, so antimatter is some potent stuff.

Today, it's possible to create antimatter in a lab, but the process requires much more energy to produce and store than it generates. Incidentally, antimatter is often used to power faster than light drives in science fiction. In the future, improved force field technology and other capabilities may make the production and storage of antimatter more cost effective. Put that on a spaceship, and you have enough energy to manipulate space-time and get places quickly. Or scale that down and you have an incredible amount of energy to power a handheld device. Exert precise enough control over that energy, and you can do a lot of cool things. One of the reasons we don't have handheld ray guns yet today is because no one's invented a small enough battery that can discharge enough power. But someday...

Well, I could keep going on and on, but that should cover the basics without getting too technical. Enjoy!