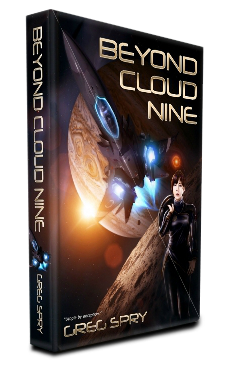 Visit the Beyond Cloud Nine official website for more details. This novel is book one of four in Greg Spry's Beyond Saga. Learn more about book two on the Beyond the Horizon page.

Ace star fighter pilot Brooke Davis lives for pushing hundreds of gees in orbital combat, but she’d give it all up in a moment to become the first human to fly faster than light. When Brooke stumbles upon a conspiracy involving terrorists, aliens, and the highest levels of government, she finds their goals seductive but their methods abhorrent. With the moral core of human civilization hanging in the balance, she must risk her shot at history, her family, and her life to prevent the schemers from forcing their nefarious brand of salvation upon the solar system.

When ace star fighter pilot Lieutenant BROOKE DAVIS isn’t pushing hundreds of gees in Jupiter orbit, she spends her off-duty solitude yearning for one thing. She dreams of being accepted to the Project Luminosity test pilot program and becoming the first human to fly faster than light. But when Brooke fails to prevent a mysterious intruder from blowing up the water distillation plant on Europa—a crime aided by fellow U.N. officers and sanctioned by her superiors—she’s drawn into a conspiracy threatening not only her shot at history, but the future of every man, woman, and child in the solar system.

EDWARD COLLINS, President of the UN Security Council, orders Brooke to keep quiet. Much to her chagrin, he also relieves her of active duty and insists she take time off on Earth. There she reunites with her twin sister, MARIE DAVIS, a small-time reporter who sets her sights on the biggest stories in the solar system. With a little ingenuity, Marie gains admittance to a press conference in which separatists attempt to assassinate the U.N. Secretary-General. Territories are seceding and acquiring antimatter weaponry, and if the UN loses its ability to keep the peace, human civilization may stumble back into the dark ages.

Just as all-out war seems inevitable, alleged extraterrestrials attack colonies throughout the solar system, forcing humankind to work together to combat the invaders. As the conflict escalates, Brooke discovers that the attacks tie back to the incident on Europa. And when she realizes the implications for the future of her niece, MAYA DAVIS, she begins to care about more than her own selfish desires.

As the invaders draw closer to Earth, Brooke must choose whether to disobey Collins’s orders and reveal what she knows to the solar system. Keeping quiet might allow mankind to triumph and usher in a golden age, albeit one based on lies and deception. But revealing the truth could send the human race down a path toward self-annihilation.

Visit the Beyond Cloud Nine official website to learn about the characters, world, technology, terminology, background, and many more fun facts.