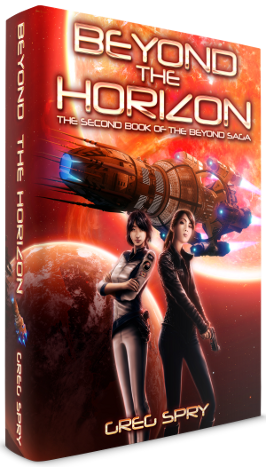 Visit the Beyond the Horizon official website for the latest details. This novel is the sequel to Beyond Cloud Nine and book two of four in Greg Spry's Beyond Saga.

Ensign Maya Davis has had her sights set on the captaincy of a starship since she launched her first toy rocket into Earth orbit at age four. But not long after she departs the solar system aboard humankind's first interstellar vessel, New Horizons, sabotage cripples the ship, killing a third of the crew and stranding the expedition light years from home under the siege of hostile forces. Without knowing who she can trust, Maya must risk her life to get the crew home and prevent the genocide of the very exospecies Horizons set out to contact.

After four years of study, twenty-two year-old Maya Davis, graduate of the new Interstellar Expeditionary Force (IEF) academy, achieves her lifelong dream of exploring the stars. She earns a commission aboard humanity's first deep space exploration vessel, New Horizons. With the entire solar system watching, and with a group of colonists aboard, the starship launches into the unknown.

New Horizons has three mission objectives: make contact with a benevolent race of extraterrestrials discovered by SETI known as the Penphins; locate a habitable, Earth-like exoplanet ripe for settlement; and search for traces of the antagonistic alien race whose invasion mankind thwarted seventeen years earlier. But when New Horizons exits hyperspace far beyond the sanctity of the solar system, sabotage cripples the ship, leaving only junior officers in command. Maya must make a series of difficult choices in order to resolve the turmoil aboard, defend Horizons from attack, and bring the stranded starship home.

Back in the solar system, forty-two year-old civilian flight instructor Brooke Davis, Maya's aunt and former UN Aerospace Defense pilot, receives a disturbing visit from a covert operative. The visit prompts Brooke to head to the Martian south polar ocean, where she learns how the secret society known as The Vril manipulated the current political and social climate into being. She also uncovers the society's nefarious agenda regarding New Horizons' voyage. With time running out, Brooke races to save her niece light years away.

Seventeen years have passed since mankind banded together to defeat alleged alien invaders. The nations and colonies of the solar system have, at long last, united under one government, the IntraSolar Commonality (ISC). The ISC has taken significant strides to end hunger, poverty, and war. The technology left behind by the invaders has hyper-accelerated mankind's scientific knowledge. Wormhole shortcuts known as phase portals connect intrasolar planets and moons, minimizing the need for spacecraft and decreasing travel times between colonies to minutes. But these portals lack the energy and stability necessary to reach all the way to other star systems.

Visit the Beyond the Horizon official website learn about the characters, world, technology, terminology, background, and many more fun facts.