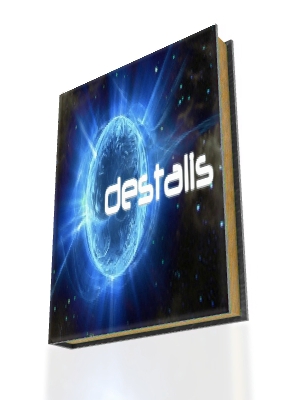 Destalis is a space opera built on a foundation of hard science but with more of the feel of a fantasy than the Beyond Saga. Over the years, I've started multiple drafts of the story and completed two full manuscripts but never quite gotten it to the point where I was happy with it. Thus, I chose to set Destalis on the shelf for awhile and concentrate on my Beyond Saga.

Now with the first two books of the saga complete and the direction of books three and four well defined, it's dawned on me that Destalis will serve as the perfect follow up. Set several thousand years after the events of Beyond Existence in another galaxy, Destalis will explore and more fully felsh out the concepts introduced at the end of the Beyond Saga.

The synopsis for Destalis is below.

LYANA is a displaced orphan who obsesses over her missing childhood, memories that her surrogate mother, NANRI KOMILA, wiped in order to protect her. Lyana's jarring, dream-like experiences compel her to undertake an interplanetary quest to rediscover her past and reunite with her long-lost brother.

Throughout her perilous journey, Lyana must avoid capture by LUTAR ZERRADIN, the cunning Prince of the Vasari Empire that conquered her home world of Destalis. She must unveil the true intentions of the mysterious ZAIA, an ancient cybernetic woman who is manipulating Lyana and the rest of the galaxy like a marionette. And Lyana must choose whether to accept her role as a legendary savior resurrected from the dead.

Only by embracing fate can Lyana liberate Destalis and unlock the mystery of the ethereal realm known as Empyrean. But delving too deep into the fundamental workings of existence may cause the very fabric of the space-time to unravel, beginning with the force of gravity.

This seventeen year-old orphan and martial artist possesses no memory of her life prior to age twelve. She vaguely recalls waking up on a starship after fleeing Destalis. Consequently, she obsesses over her missing past. Her curly blonde hair, exotic green eyes, and pale skin set her apart from the narrow-eyed, dark-skinned inhabitants of the feudalistic world of Dainichi, the planet on which she resettled.

The brash prince of the Vasari Empire accompanied the forces of the Zen Zahar during the Vasari Empire's conquest of Destalis. He has designs on the rest of the galaxy once he inherits the reigns to his father's empire, provided he can get General Alfar Vasgard out of the way.

Nanri is Lyana's unofficial foster mother. The former aid to the deceased king and queen of Destalis saved the injured girl while escaping from the planet, brought Lyana to Dainichi, and raised her as her own daughter. Nan's biting sarcasm and callous attitude often leads her to clash with her surrogate daughter. The secrecy Nan maintains about what happened back on Destalis drives Lyana to take matters into her own hands to uncover her identity.

Chris is Lyana's long-lost brother. When Lyana finally remembers that he exists, she embarks on a quest to seek him out.

Not much is known about this mysterious woman except that she is unimaginably strong and resourceful. She wears a cloak, uses holographic distortion to obscure her face from view, and often appears at critical moments, mostly to observe.

General Vasgard commands the Zen Zahar, the powerful armed forces of the Vasari Empire. As prince, Lutar believes he should lead them, but King Kyran placed Vasgard in charge, believing that Lutar isn't yet ready.

Jendi is the sixteen-year-old Regalia (princess) of the planet Talosia. Her disgust at her father's subservience to the Vasari Empire prompts her to seek out a way to liberate her home world.

Aleralyn is--or rather, was--the beautiful princess of Destalis. The exaggerated legend of how she killed a hundred Zen Zahar soldiers prior to being gunned down during the Vasari conquest of Destalis turned her into a galactic icon.

Arik is the younger brother of Aleralyn. He escaped from Destalis during the Vasari attack. His whereabouts are currently unknown.