Review: Beyond the Hidden Sky 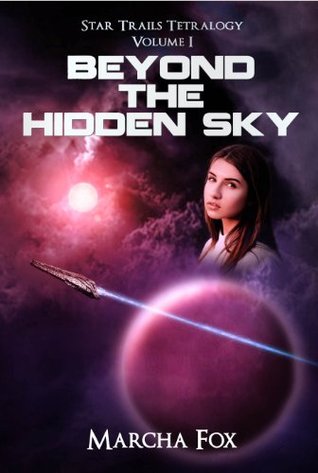 I liked a great many aspects of Beyond the Hidden Sky by Marcha A Fox. The book follows a teenager who must survive on her own in a dangerous galaxy after getting separated from her family. However, the novel often struggled to hold my attention.

First, the positives. When events are taking place, the story shines. Creena is a likeable protagonist. She whines and pouts a bit too much, but she's a teenager, so she gets a partial pass. Her adventures and her unique supporting cast (especially the non-humans) are entertaining.

I also enjoyed the scenes where her father takes clever action toward resolving the conflict, and I appreciated the bittersweet ending. And who doesn't empathize with the struggle of a loving family trying to reunite?

Snurkles! I rolled my eyes at this term at first, but now I can't get it out of my head. The author does a good job of inventing her own terminology and making the terms understandable through context.

Now, the constructive criticism. Much of the prose consists of characters sitting around and pondering their circumstances. This frequent info dumping via thoughts kills the tension. A story needs valleys to offset the peaks, but there were far too many long valleys. Often times the reader also knows much of what is being pondered, adding a feeling of redundancy.

The antagonists are one-dimensional cliches who receive too little page time to build their characters. There's a brief scene early in the book where a bad guy smirks and sniggers as he hatches his evil, as-yet-unexplained scheme. That was one of the big reasons I set the book aside and almost didn't return to it. After finishing the novel, I still don't know why the evil main antagonist was manipulating the good-hearted family. In my view, morally ambiguous agenda vs. morally ambiguous agenda rings truer to real life than cliche good vs. evil.

I didn't particularly care for the logic versus intuition argument. It's been done before too many times. Any reasonably wise person knows that both are important. The left and right brains go together to make a well-rounded individual.

The characters putting their trust in The Universe didn't work for me, either. An omnipotent supernatural force randomly intervening whenever its convenient for the good guys is a weak plot device. For example, Creena too often stumbles upon something that provides exactly what she needs to survive. When a protagonist earns victory by fighting through hardship and taking direct (and especially clever) action to affect her circumstances, the results are typically more satisfying.

I would have liked to have seen the fate of something big, like the population of a planet or solar system, depend on whether the family lived or died. That would've raised the stakes and the tension.

Regarding the aspects of hard science in the book: The author works a lot of the science into the flow of the story, but there are times where the explanations are told/dumped rather than shown. If you have to tell, do it after showing the effects so the reader knows why they should care about the explanation. Also, I question the warp theories. In real physics, the loophole that makes the warp (Alcubierre) drive work is that while matter can't move faster than light, spacetime can perhaps be manipulated to do so. The ship and people inside a warp bubble move only at the low velocity they were moving at when they initiated the bubble, so they should experience no relativistic effects. But hey, who knows for sure until we actually do it someday, right? The need to account for time dilation and warp gulleys work well within the context of the book, so this was the least of my concerns.

All in all, this is an okay book. A YA audience or people with different expectations might enjoy it more than I did. I'm a long-time hard science fiction reader and fellow author who prefers events and plot twists to unfold at a faster pace. Still, this is the first in a series, and I have no doubt the author has improved her craft in subsequent books.