Review: Rise of the Prince (Pearseus #1) 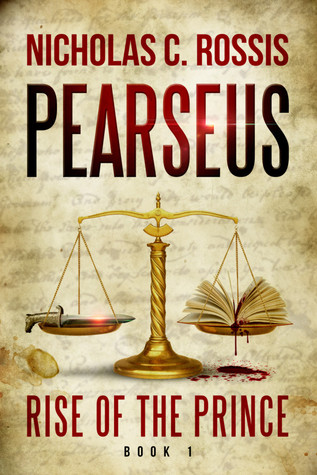 Overall, I enjoyed parts of Rise of the Prince (Pearseus #1) by Nicholas Rossis but ultimately felt that the novel struggled to come together as a cohesive story. I finished reading RotP a month ago. Given my recent move across the country, I haven't had many free moments to write or read, let alone write reviews. Now, I'm finally getting back to it. Here's what I recall.

The story was well-written and flowed well. Rossis knows how to write dialogue and prose.

Personally, I found Rossis' focus to be a little misplaced. Too often, the reader is abstracted away from what's really important. Too many of the scenes involve characters sitting around talking about what's going on rather than actually showing what's happening. Every other scene portrays character(s) talking about the ill-explained and ill-motivated war going on on a battlefield far, far away. I don't care much if I cant't see it. When the reader is actually immersed in the drama or action, the story shines.

The novel doesn't have a clear cut main protagonist, an approach I don't favor but an acceptable one that's becoming more and more popular. It wasn't until many chapters into the book that I got to know the key players and how they related to one another. The book offered a large cast and each chapter featured a different key player as the viewpoint character. I liked the approach, but it was still difficult to get know them all.

Parad, the head military commander of the most powerful land/country, was one of the more likeable and sensible characters. He acted as the voice of reason and constantly got the short end of the stick because of it. That made me emphathize with him big time. Teo was the stereotypical self-serving antagonist who would serve whichever side benefited him. He was interesting and helped to drive the story, but he didn't have enough truly vile or redeeming qualities to make me care about him. Justice Styx, the leader of the most powerful land/country, needed more background and redeeming qualities. She's essentially the Cersei Lannister of the story but without anywhere near the depth. As a result, I wasn't all that moved by her fate at the end. And of course the book is called Rise of the Prince, yet the rising prince, Cyrus, doesn't have much personality and plays too little a role until later in the story.

One thing that drove me crazy was the frequency with which characters smiled and smirked. It happened so frequently that it became laughable. I try to limit and pay close attention to the context in which my characters smile--especially smiling by my antagonists--to make sure they don't become cliche, cackling villains. In real life, people don't smile and feel all self-satisfied when they come up with a clever, unfoilable plot. No. They worry about whether or not the plan is actually going to work because failure has serious consequences.

Even after finishing the book, I still don't have a clear sense of the different lands/countries/governments and who represented each. To a certain extent, this was par for the course in a fantasy story. But some better explanations, simplification, and use of conventions to help me remember would have been helpful.

As the story went on, Rossis started devoting significant dialogue and prose to his personal philosophies. The book became overly preachy during these sections. I could've forgiven the pontification if it had driven the plot forward, but the story could have easily done without any of it.

I would classify this book as space fantasy, not science fiction. In my view, hard science fiction should be a redundant term. If you're not putting the "science" in science fiction, it's not science fiction. But others would certainly disagree. Rossis provided a smidgen of science when he explained why the days/months/years on his planet are longer. Otherwise, he simply included typical elements of sci-fi like energy swords and e-readers on a world where civilization had slipped back to a medieval level of progress after a colony ship crash-landed hundreds of years ago. High tech devices were in short supply and controlled by people in power, which was a fairly cool concept.

Unfortunately--and in disagreement with a handful of other reviewers--I found Rossis' marriage of supernatural/fantasy and science fiction elements to be awkward and off-putting. The author gives no explanation for how his spirits and demons (the non-scientific) can coexist with crashed space ships, e-readers, and other forms of tech (the scientific). Keep in mind that technology is the application of science (dictionary definition), so you can't have tech/science and fantasy without dealing with the contradictions. Typically, science fiction of such nature attempts to justify the existence of "spirits/ghosts" by referring to them as alien entities of pure energy, or something like that. Rossis made no such effort in RotP, which left me stewing over the issue throughout the novel.

Plot-wise, the major subplot of the prince rising to power completes about 80% of the way through the novel. Better development of Cyrus and Styx would've made this conclusion more gripping. Another major subplot was driven by the spirits' subtle intervention in human affairs; the last 20% of the book focused on this later angle. However, to the best of my recollection, Rossis never revealed the spirits' motivations by the end, which made for an unsatisfying conclusion. I'm sure that the sequels will yield more answers, but I believe the major subplots in a given novel need to be resolved within that same novel unless you're going to write "to be continued" at the end of the last chapter.

All in all, there was a lot to like. The story gripped my attention at times but started losing me toward the end, which is the opposite of what should happen. I cheer for and support fellow indie authors. This might not have been my favorite story, but I have little doubt other types of readers will enjoy it more than I did.