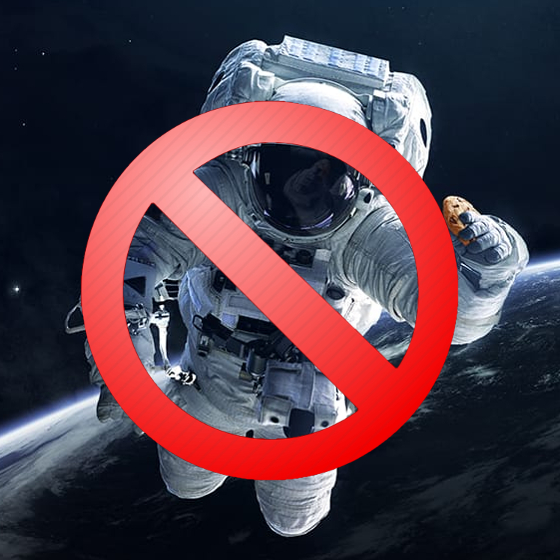 International Space Station — On July 27, 2020, NASA mission control asked astronaut Major Karen Mumpsimus to perform a spacewalk to repair one of the International Space Station's solar panels. However, the astronaut refused to wear a spacesuit during her excursion outside the station based on the grounds that doing so violated her constitutional rights as a United States citizen.

"No one is going to tell me what I should or shouldn't wear," Major Mumpsimus said at the time. "I can't breathe with a helmet on or through any sort of face covering. I have a medical condition."

Doctor Voisoff Rezonski, a cosmonaut and fellow station occupant, rebuked the claim that people with asthma and other chronic pulmonary diseases would breathe easier in space without wearing a suit. "As a matter of fact," the doctor said, citing multiple studies and scholarly articles as evidence, "those afflicted by these conditions are more likely to survive in space with a suit as opposed to without."

"Yeah, well, I'm exempt from all regulations mandating spacesuit wear, regardless of whether I'm on Earth or in space." Mumpsimus held up a laminated exemption card to the doctor.

"These cards aren't a real thing," said Dr. Rezonski, who noted more than one misspelling on the card. "Do you have an actual written medical excuse from a flight surgeon or personal physician?"

Yanking the card away from the doctor, Mumpsimus said, "No, but I can't wear a suit. I just can't. It's my right."

When mission control warned Mumpsimus that she would die without a suit in the freezing cold and near-vacuum conditions of space, she remained adamant in her stance.

The major dismissed the doctor's words of caution, saying, "Experts didn't say that we needed suits hundreds of years ago. They thought space was just more sky. And where there's sky, there's plenty of air to breathe, right? But now all of a sudden we need to wear suits? They should make up their minds!"

Dr. Rezonski showed Mumpsimus readings from several instruments monitoring the environment external to the ISS. The instruments confirmed the low temperature and the lack of oxygen and atmospheric pressure outside the station.

"That's just misinformation," Mumpsimus insisted. "Companies build their instruments to give scary readings, so we'll buy their products. I bet space is perfectly survivable, just like how the Earth is actually flat."

When asked to provide an alternate explanation for how the ISS passes over the same geographic locations on the Earth's surface every ninety minutes, Mumpsimus had no comment.

"You worry about you, and I'll worry about me," Mumpsimus told Dr. Rezonski as she stepped into the airlock. "Not wearing a suit doesn't affect anyone but yours truly."

The doctor reminded Major Mumpsimus that he needed her help to keep the station running and to pilot the return vehicle back to Earth. If she didn't survive the spacewalk, she would also be putting his life in jeopardy. "Wearing a suit doesn't just protect you," Dr. Rezonski pleaded with her. "It protects me, the mission, future missions, our countries, and the world in general."

As the internal hatch closed behind her, Mumpsimus scoffed at the remark. She then proceeded to open the external hatch without suiting up.

The White House released the following official statement on the matter:

"In lieu of wearing a spacesuit, we recommend that astronauts drink bleach to protect themselves from the harmful effects of space. More importantly, we are thrilled that this situation takes the focus off of the president's declining poll numbers, racial insensitivity, brash domestic troop deployments, crumbling foreign relations, revoking of environmental protections, ignorance of climate change, and general lack of qualifications. Let's make this country great again!"

Fifteen seconds into the spacewalk, Mumpsimus could be seen floating outside the station with pale skin, no pulse, and eyes locked open, still exercising her rights.

Ha. Well, I hope you guys enjoyed my spoof article. If you somehow don't get it, try replacing the word "suit" with "mask." I've always been a fan of The Onion, so I hope my article is worthy. Look for more posts in the coming months. I'm getting close to completing the first draft of book 4 in the Beyond Saga. This article is also the type of humor you'll see in my upcoming Bears in Space stories. Stay smart and stay safe.

Roz and his goofball crew must save the galaxy from cliche alien invasions, trite zombie apocalypses, and bad rom-coms.
Read more